You’ve seen it in guidebooks, and you may have even already visited it during your stay in Paris – the Louvre Pyramid. The glass and metal pyramid sitting front and center at the Louvre Museum is probably one of the most photographed structures in Paris, behind the Eiffel Tower. In fact, upon closer observation, there are actually three small pyramids in the Louvre courtyard. The larger pyramid acts as the entrance to the museum, while the three others are simply decorative. So, how did these things get here and why?

The pyramid was commissioned back in 1984 by President Francois Mitterand and is made up of 673 glass segments reaching 71 feet high. It was originally built to help filter the large crowds causing a bottleneck at the entrances of the famous museum. Not only that, there were several entrances set up around the museum – tourists were having trouble finding them, much less getting in! Chinese-American architect I.M. Pei was put on the project, and soon came up with the geometrical shape for the new Louvre entrance.

Completed in 1989, the pyramid’s design was a success, eventually inspiring similar designs at Chicago’s Museum of Science and Industry, and the Dolphin Centre in London.

[maxbutton id=”1″ url=”https://www.fattiretours.com/paris/tours/skip-the-line-louvre-tour” text=”Tour the Louvre and Skip the Line” ] 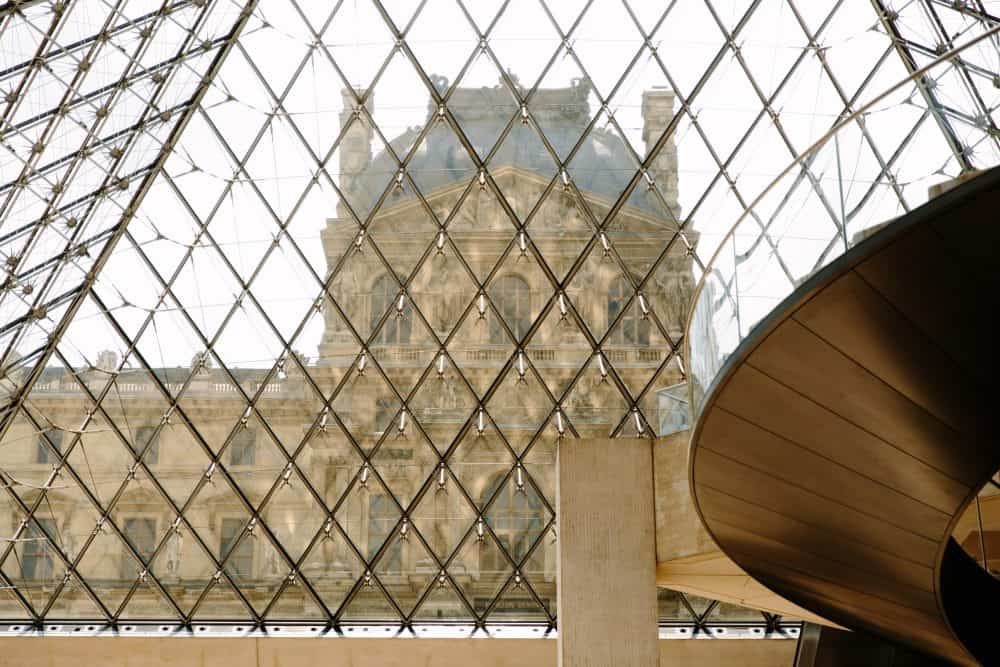 However, the Louvre pyramid project wasn’t immediately met with open arms. Many critics saw the modern structure as sacrilege, given its setting against such a historic 12-century building as the Louvre. Many ordinary Parisians also opposed the pyramid’s construction, becoming weary after other contemporary structures like the Montparnasse Tower imposed themselves amongst classic Haussmannian buildings. The critics were silenced, though, and the building of the pyramid went through as planned.

In 1993, another pyramid was added to the Louvre space – La Pyramide Inversée. This inverted skylight hangs over the busy Carrousel du Louvre mall, where shops, cafes and places to wander lie waiting. If you stand under it and look up, you’ll notice that it is a smaller, upside-down version of the original pyramid.

The Louvre pyramid has also figured into recent history, when both it and the museum were featured in Dan Brown’s novel, The Da Vinci Code. Visiting the famous museum and its pyramid takes on a folkloric tone for anyone who has read Brown’s book, and you’ll have even more fun exploring the iconic space.

Whether you love or hate the Louvre pyramid, there’s no denying that it has become one of the most emblematic parts of Paris. Stand near it and you’ll notice the frenzy of tourists pretending to hold its tip while someone not far away takes their photo. And there’s nothing more enchanting than seeing the light bounce off the pyramid as the sun sets.

There’s a great view of the Eiffel Tower from the Louvre but if you want to get up to the top without the hassle of waiting in line, join one of our Skip the Line tours.