What to See and Do in the 4th Arrondissement of Paris?

What to See and Do in the 4th Arrondissement of Paris?

The area of Paris that includes the 4th arrondissement (district) is about as central as you can get, with the city’s Renaissance-era  City Hall within its limits, and also encompassing the center-most “island” known as the Ile de la Cité and its magnificent, 12th century crown of gothic architecture, Notre Dame Cathedral. Stretching from the right bank of the Seine river in the south, up through Le Marais neighborhood and the Georges Pompidou Center to the north, the arrondissement pushes to the east towards Place des Vosges and ends at the Bastille square. The neighborhood is also home to the city’s most active gay community, and has become a hub for trendy nightly outings. Here are just a few of the area’s most impressive sights and attractions:

Paris’s famous modern art museum has remained a joy (and curiosity) to behold from the inside out since its inauguration in 1977. Its unique, color-coded exterior – green pipes are for plumbing, blue are for climate control, with electrical wires in yellow – is a feast for the eyes. Inside, you’ll find works from some of the most well-known artists in the contemporary movement, with temporary and permanent exhibitions. Be sure to check out the rooftop Le Georges restaurant and terrace for a panoramic view of Paris.

19 rue Beaubourg
Métro: Rambuteau
Price: €13 for entry to the Museum of Modern Art and temporary exhibits

While visiting city hall may not seem the height of excitement, the French have made sure that this government building is anything but banal. Housing the local administration, including the Mayor of Paris, the Hotel de Ville is an impressive structure reaching 112 feet high and featuring over 300 figures on the building’s facade. Following a fire set to it during the Franco-Prussian war in 1871, the city hall was reconstructed from the inside out. Now, it can be admired from street level or by way of a tour through the inside. A bit of a gory detail from the city hall square’s history? In medieval times the square was called “Place de la Greve” and was the place of choice to torture and execute criminals. 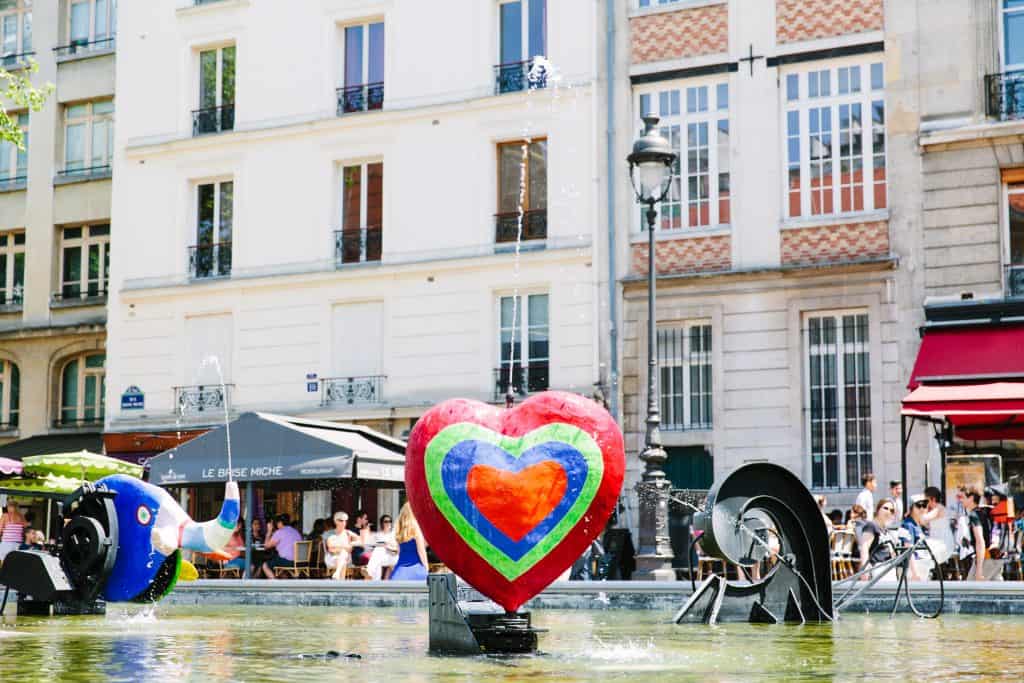 This hip neighborhood truly epitomizes the 4th arrondissement. Filled with cafes, shops and museums, the Marais is ideal for a Sunday stroll, an afternoon cake and coffee, or a night out on the town. A good starting point is the Place des Vosges, where you can sit down for a picnic in the square itself or browse the many galleries or upscale, trendy shops nearby. Here, you’ll find one of Paris’s most thriving Jewish communities, with the rue des Rosiers offering amazing falafels, baked goods, Kosher items and bookstores. Go a little further towards rue des Archives and you’ll happen upon loads of cafes, nightclubs and shops geared towards the gay community. Make sure to hit the area at night, when this part of the neighborhood really comes alive. Reserve some time to stop into the Hôtel de Rohan-Guéménée, where writer Victor Hugo lived from 1832 to 1848, featuring various memorabilia from the author’s life.

To really get to know this extraordinary area well, we recommend booking a good walking tour, such as the walking tour of the Marais.

Having a hard time figuring out how the city’s different neighborhoods connect? Take a bike tour of Paris to see the streets in action, and understand how the gorgeous city is put together!