What to See and Do in the 2nd Arrondissement of Paris?

What to See and Do in the 2nd Arrondissement of Paris?

Focused around the famous Opera Garnier with its iconic domed roof, the 2nd arrondissement, situated right in the city center, is a great starting point for a day of touring, and offers a host of sights to see, including the lovely passages (shopping arcades) (pictured) that became so popular in nineteenth-century Paris. It’s also the business hub of the city, with banking headquarters and the Paris stock exchange here as well.

If you have the time to see an opera during your stay in Paris, you won’t be disappointed, but tickets are pricey. A good happy medium is taking one of the unaccompanied visits (10/6 euros), where you can admire the gorgeous gold-laden chandeliers, the striking grand escalier (staircase) and potentially the auditorium where the national and international ballets perform, and where a stunning ceiling fresco by artist Marc Chagall mesmerizes. The outdoor front staircase is a popular meet-up or quick lunch spot, and also offers a great view of the commanding Madeleine church in the distance. The grands magasins (department stores) district is right behind the opera, too, so if you’re in the mood for shopping, check out the sprawling departments at Galeries Lafayette or Au Printemps on Boulevard Haussmann.

One of the best parts of this neighborhood is also its most hidden treasure. “Les Passages” is the common term to describe these 19th-century commercial arcades, which weave throughout this arrondissement and offer a unique way to experience the city. The area boasts around two dozen arcades, with Passage Choiseul being one of the most well-known. The Grand Boulevard metro stop is a good place to start. Shop for jewelry, sit down for Korean food, browse books or visit an art gallery – there are plenty of activities to choose from in les passages. 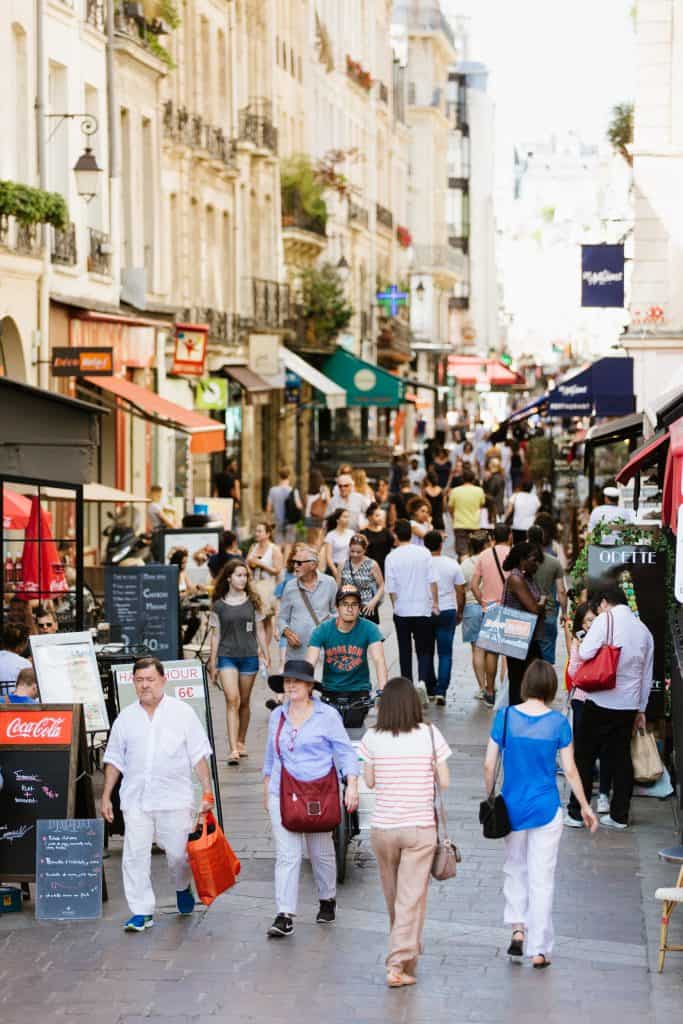 This pedestrian street is a true delight, if only for the fact that cars are not allowed – a rarity in Paris. But there’s much more here than a few moments of calm. La Maison Stohrer is one of the city’s oldest bakeries and offers scrumptious artisanal treats, including the original Baba au Rhum pastry. Over at the Pain Quotidien, try one of the fresh organic salads or the amazing organic hazelnut spread. Meander down the street and you’ll find plenty of charming cafes, where you can wile the day away people-watching, or hit any number of shops.

This is the city’s historic stock exchange, although since 2000, the iconic building has been known as Euronext Paris. Now, it hosts France’s securities market, after merging with the Amsterdam, Brussels and Lisbon exchanges. The grandiose nature of the building is worth a picture or two, as is the stately interior. Across the street is the Agence France Presse, France’s national press agency and the world’s oldest, dating back to 1835. Although the building has changed since then, the agency remains an important part of France’s media history.

Lovers of sushi and Manga comics will be in heaven in this neighborhood, which houses the largest grouping of Japanese restaurants and shops in the city. For a quick bite to eat, order an inexpensive and delicious bento box at Juji-ya, or sit down at the ultra-popular Kintaro for a soba noodle soup. Saint-Anne street, just down from the opera’s Palais Garnier, is a good starting point for finding all things Nippon.

Travel Tip: Once you’ve explored the second arrondissement, head south toward the Seine river to weave through the gorgeous areas around the Palais Royale and the Louvre Museum. The thought of visiting the crowded museum giving you a headache? Book a skip the line tour of the Louvre to enjoy all the palace has to offer without having to waste hours in line…