10 Things You Didn’t Know about the Trevi Fountain

10 Things You Didn’t Know about the Trevi Fountain

There are myriad gorgeous sights to behold when in Rome.

One of my most favorite things to see in the Eternal City is the stunning Trevi Fountain in central Rome. The fountain is an architectural work of art, and it has been called the most famous fountain in the world. It’s also where many tourists go to throw a coin into the fountain to make a wish.

This tradition gained mainstream popularity after the 1954 Hollywood film “Three Coins in the Fountain.” In the movie’s plot, three American secretaries travel to Italy in search of adventure and toss their coins into the Trevi Fountain in Rome and make a wish.

If you’ve got some wishes in mind, head over to the Trevi Fountain, in between touring around the city, by bike or by foot or by food tour. Marvel at this stunning feat of architecture and check it off your bucket list, too!

(Tip: The Trevi Fountain tends to get very crowded with tourists. For optimal viewing and picture taking, go to the fountain first thing in the morning, when fewer people will be there. Also, no matter what time of day you’re at the fountain, keep your belongings and valuables close to you.)

Trevi Fountain, as it looks today, was constructed in the 1700s. In 1732, construction began on this great fountain. The commission to re-do the fountain was originally given to a Florentine, but the Romans were outraged by this, so it was then given to the second-place design winner and Rome native, Nicola Salvi. Sadly, Savli died in 1751, before the fountain was completed in 1762.

The overhaul of the fountain supposedly came about after Pope Urban VIII declared in 1629 that he was “unimpressed with the earlier version” of the fountain. 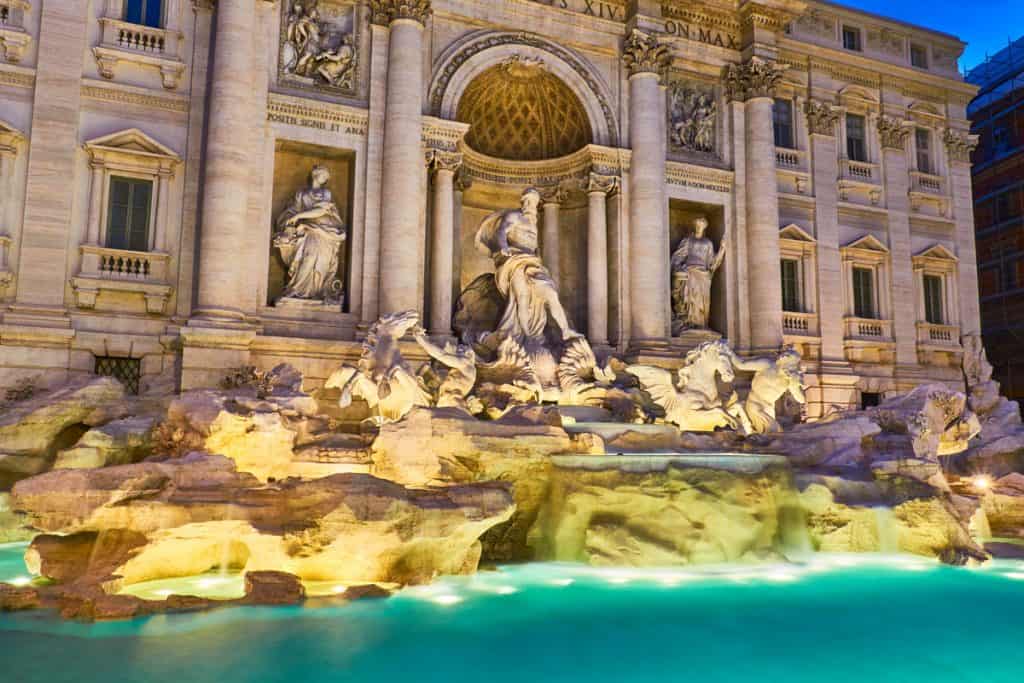 The Trevi Fountain is in the Trevi district in Rome. Its name in Italian, “Fontana di Trevi,” literally means “Three Street Fountain.” Because the fountain is located at the junction of three roads, it came to bear this name.

Both the Trevi Fountain and the Colosseum were built using travertine stone. The weighty stone was sadly responsible for the death of several builders and a stonecutter during the construction of the fountain. 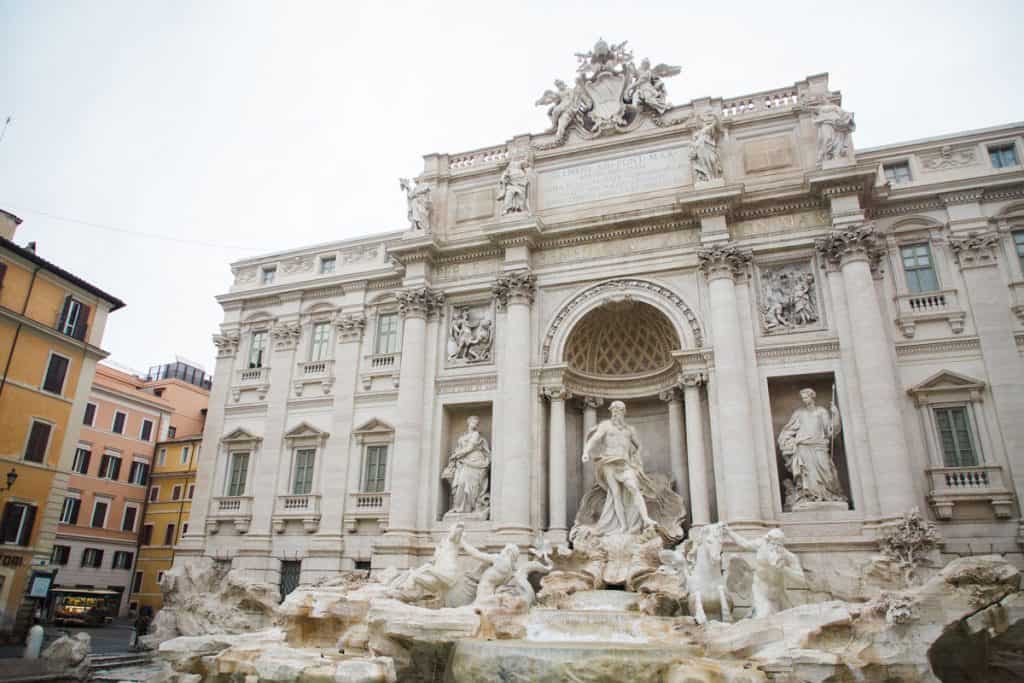 Speaking of thievery, the fountain’s greatest-known thief and one of its most frequent visitors was a man who went by the nickname “D’Artagnan” (real name: Roberto Cercelletta). For 34 years, Cercelletta stole coins from the Trevi Fountain. It was international news when he was finally caught in 2002. The New York Times even published an article on the story.

Quite literally, this fountain is Hollywood royalty. Cinephiles will know it on sight, of course, from that iconic scene in the 1960 Fellini film “La Dolce Vita,” when Swedish actress Anita Ekberg prances about in the fountain and beckons for Marcello Mastroianni to come in and join her. (He obliges.) The fountain has also made its mark in other beloved films, like “Roman Holiday,” “The Lizzie McGuire Movie,” and more.

All kinds of oddities turn up in the fountain – everything from glasses to religious medals, and even dentures! We recommend just sticking with tossing coins in, though.

Per a report from June 2017, it was recorded that visitors to the Trevi Fountain threw $1.5 million into the fountain. The money is collected and sent to Roman charities. So if you choose to throw a coin or two into the fountain on your visit to Rome, you can rest assured knowing that it’s going to a good cause. Just this past summer, the mayor of Rome assured residents and visitors that the money will continue to go to charity. The money retrieved from the fountain is sent to a Catholic charity called Caritas, which aims to help underprivileged and the poor, as well as AIDs patients.

The Smithsonian Magazine reported that, contrary to a rumor circulating through Rome that the money in the fountain would be taken by the government and used to bolster the city’s infrastructure, this was not the case, and the money would continue going to help the poor via Caritas.

Now, for the most important bit: successful wish-making execution! Lore goes that in order for your wish to come true, you must turn around, facing away from the fountain, and toss your coin in over your shoulder. If you do so, you’ve guaranteed your return visit to Rome, as the legend goes. And, it is said that if you throw a second coin into the Trevi Fountain, then you’ll fall in love with an Italian. That’s amore! 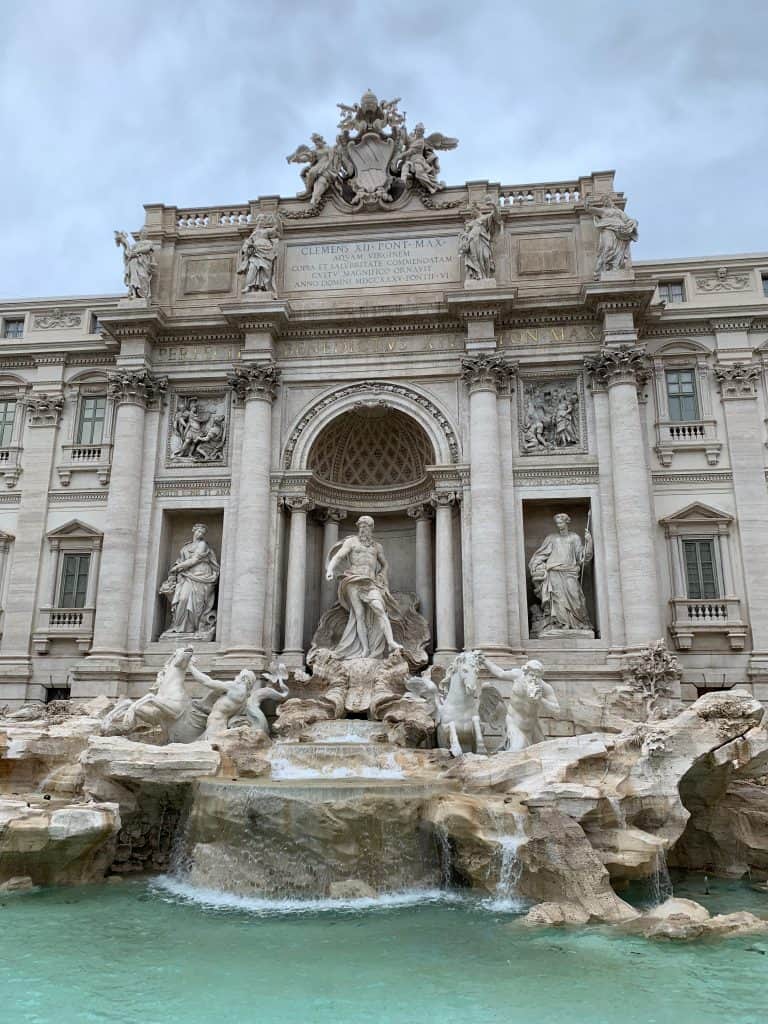 The Trevi Fountain served as a catwalk of sorts in 2016 for Italian fashion house Fendi’s 90th anniversary couture show, where models seemingly walked on water in the fountain. (A glass catwalk was constructed, giving the appearance of a miraculous walk-on-water ability.) In 2013, Fendi gifted the fountain with a $2.2 million makeover, which took 18 months to complete. The restoration included the addition of LED lighting, a cleaning of the statues, and more.