By Jane Paech, Author of Delicious Days in Paris

The sun is shining as we hop on our cruisers and start to wind our way through the quiet back streets of the 15th arrondissement. Slowly we gather speed and confidence and soon we are sailing along, wind in our hair and the fresh Paris morning in our faces. We pedal past dogs trotting gingerly on the footpaths, and locals with fresh baguettes tucked under their arms.

I love Paris on Sundays, when the city gradually stretches itself awake and gently recovers from the busy week. Sundays are all about pleasure and relaxation and especially now in springtime, Parisians throw off their heavy coats and come out to play, rejoicing in blue skies and the outdoors. 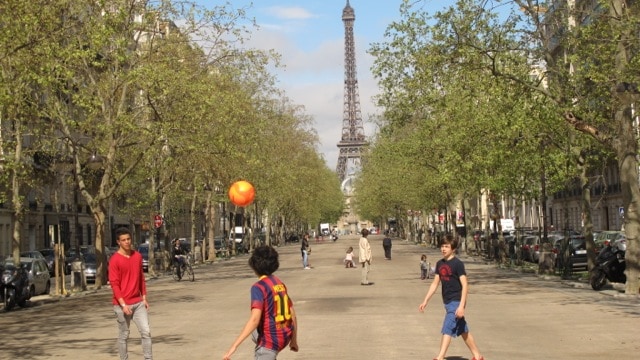 For both first timers to Paris and seasoned travellers, Sunday morning is a wonderful time to hop on a bike, when the roads are fairly clear and you have the space and time to really take in the city as you meander through the streets.

This morning there are a dozen of us on the Paris Day Bike Tour, one of four bike trips offered by Fat Tire Bike Tours, a child-friendly company that offers bicycle expeditions in cities throughout Europe. Designed for the English-speaking traveller, they aim to be fun and informative, with each guide sharing their own fascinating anecdotes rather than overloading you with a history book of dates. 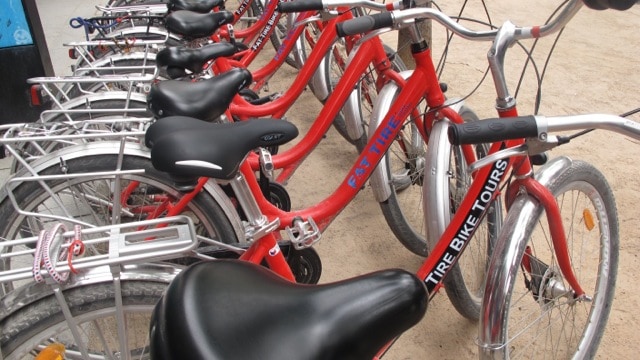 My first encounter with Fat Tire was in 2012, when I pedaled my way down a country lane to Monet’s Gardens. The memorable day, which started with a visit to the morning farmers’ market followed by a leisurely picnic on the banks of the Seine, is featured in my newly released book Delicious Days in Paris if you would like to read more. 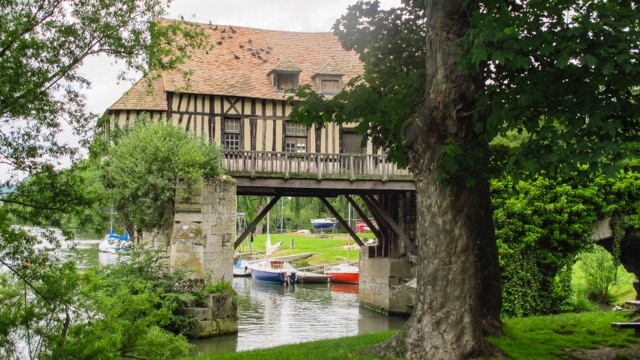 Since the launch of the Vélib (the public bicycle sharing system in Paris), cycling seems to have really taken off and this visit I was keen to give cycling in the city a go. Rather tentative about jumping straight on a Vélib with no city cycling experience, I once more looked to Fat Tire. The Day Tour is a great initiation to city cycling as you gently familiarize yourself with Paris road rules, and learn to navigate bike lanes and Paris traffic. It’s also a novel way for visitors to orientate themselves to the city as they pedal past famous sites. 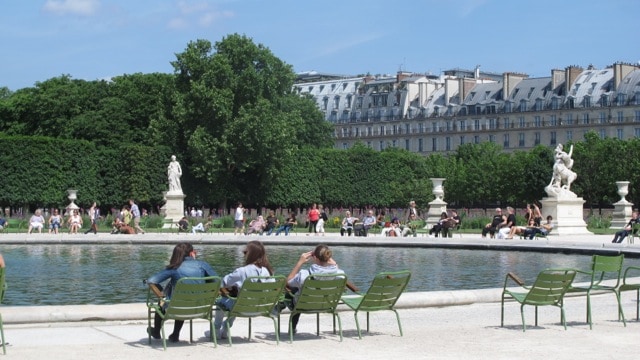 Our guide today is the energetic Anita. She takes us down gravel paths and through busy intersections as she introduces us to the sites, stopping along the way at Ecole Militaire, Les Invalides and Napoléon’s Tomb to relay a few tasty tidbits.

We rattle over the beautiful Pont Alexandre III, pausing for a fabulous vista down the Seine. Soon we are flying along a bike track alongside the river and bravely scoot across Place de la Concorde toward the Jardin des Tuileries for lunch.

We stop in the middle of la place to learn about its history as cars and scooters whizz over the former site of the guillotine. On one side sits the majestic Hôtel de Crillon, a legendary Palace Hotel, and one of the oldest luxury hotels in the world. Over three centuries – from its prime position on la place – the hotel has witnessed the reign of two French kings, the French Revolution and the Napoleon Empire. The Crillon’s glitzy doors are currently closed for renovation and will reopen in 2015 to celebrate its next illustrious chapter.

As we watch the Fountaines de la Concorde splash and spray in the breeze, Anita tells us that the Hôtel de Crillon traditionally puts up the winner of the Tour de France for a week after the race in one of their plush Presidential Suites. Staying in such opulence will usually set guests back thousands of euros per night. ‘After seven-time Tour de France winner Lance Armstrong was found guilty of doping, the Hôtel de Crillon sent him a rather large bill…for all of his seven stays!’ says Anita.

We park our bikes and enjoy a café lunch under the leafy trees in the Jardin des Tuileries. At this time of the year the gardens are a riot of spring flowers; boules chink under the linden trees and children sail toy boats on the pond. Parisians promenade along its wide, central pathway, reveling in the Sunday sunshine. 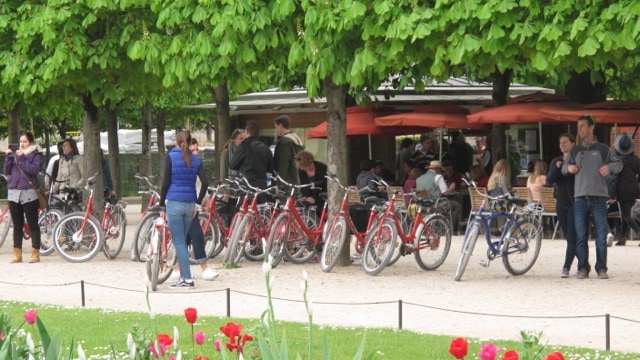 Over lunch, I get chatting to Anita, who grew up in Spain and has lived in the US. I ask her about cycling in Paris. ‘After cycling in New York City for four years, the traffic here is very calm,’ she says. ‘It’s a bike friendly city. There are some lanes exclusively for bikes, but often they are shared with buses. The buses will generally beep you to tell you they are coming. It’s the taxis that you really have to watch out for! They drive much faster, and can get very agitated.’

We walk through the gardens and soak up the full splendor of Paris, learning a little about the Louvre before cycling back along the river to the Eiffel Tower, stopping to marvel at the iconic structure. Anita tells us that the shade of paint on the tower changes from top to bottom, to give the illusion that the tower is larger, and that originally the tower was painted red. After dark, the tower comes to life and sparkles on the hour for five minutes, until 1 am. ‘The electricity bill for the tower is 14 000 euro a night,’ says Anita.

We cruise back to the depot, and with my confidence up I’m ready to jump on that Vélib. After all, Sunday afternoon still stretches before me. 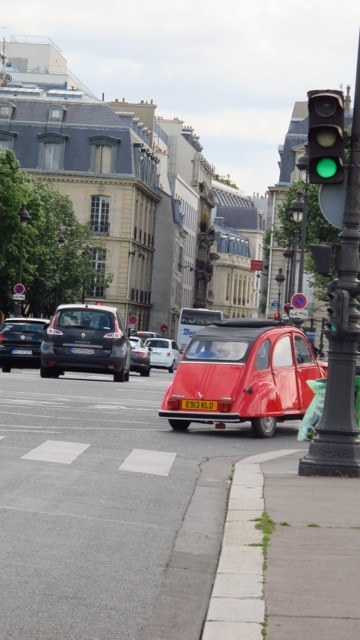