How to Experience the Tour de France in Paris

How to Experience the Tour de France in Paris

While the Women’s World Cup has been on everyone’s minds in June, another sporting event will soon take over the public conscious, as well as the streets of Paris.

Since 1903, the Tour de France has swept through the hearts and minds of cyclists and cycling fans worldwide. It is one of the three grand tours of its kind, along with Giro d’Italia and Vuelta a España.

Beginning 116 years ago, the Tour de France (nicknamed “La Grande Boucle”) is a weeks-long sporting event unlike any other. By name and caliber and sheer size, it draws crowds as inspired spectators and world-class athletes as top competitors.

The 106th Tour started Saturday, July 6, and will run through to Sunday, July 28. Le Tour will conclude in Paris on the 28th of July.

Will you be in town for the grand finale in the City of Light? If so, here’s what you need to know.

Brief History of the Tour

The Tour de France began as a sales ploy, more or less.

Yes, that’s right. The event was created as kind of a marketing scheme to help increase sales and circulation of a French newspaper called “L’Auto.” The paper announced in January 1903 that the unprecedented racing event would be held that summer. And the rest, as they say, is history. (By the way, it was a gamble that paid off – circulation of “L’Auto” doubled as a result of the race.)

The first Tour de France began in May 1903; it started – and ended – in Paris. The inaugural Tour was over one month long and wove through various parts of France, including Lyon, Bordeaux, and more. The winner of the first Tour was Italian-born Frenchman Maurice Garin.

(Maurin was, however, stripped of his title during the 1904 Tour, as a result of cheating. As we all know, this played out again with another competitor, decades later.)

Although the Tour de France has been around since 1903, it has not always been an annual event. The event was disrupted by – and stopped during – both World War I and World War II.

Le Tour remains a male-only event. However, gender equality activists are taking to the road this year, in an effort to advocate for another women’s Tour de France, reports the BBC. (There was previously a women’s Tour in 1984, but it failed to gain steam.) This year, female cyclists will do as they’ve done since 2015 and ride along the course as well, to raise awareness for greater gender parity. 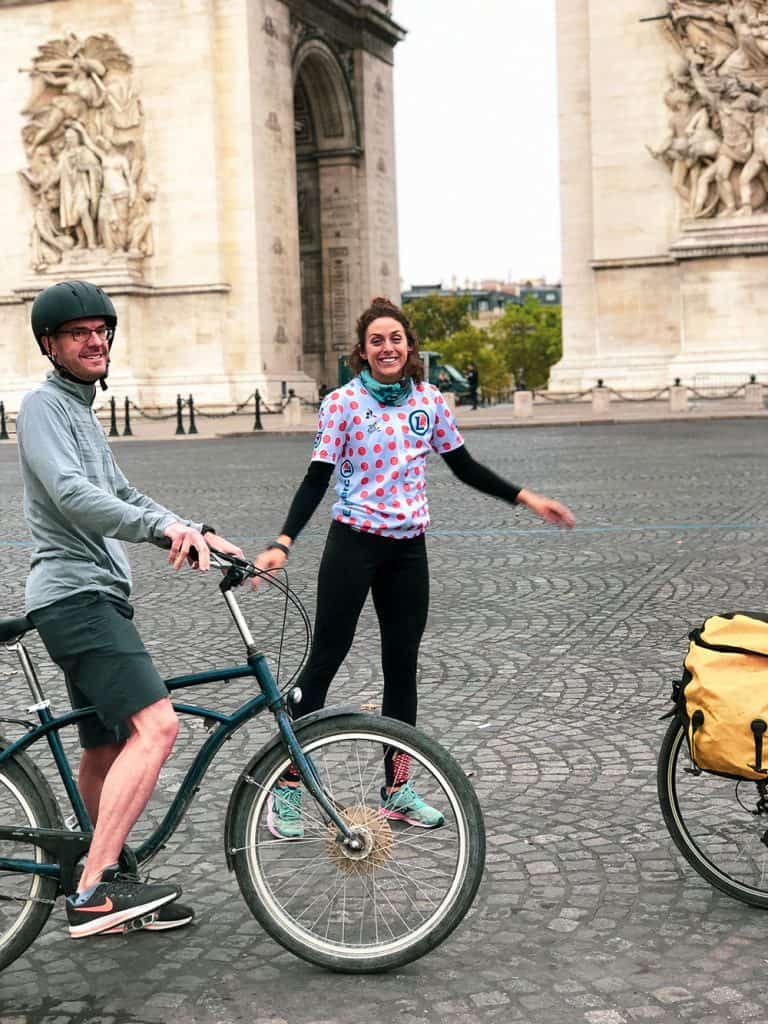 In the 2019 Tour de France, 176 cyclists are competing for the stage wins, as well as, of course, those notable bright yellow jerseys. Traditionally, there are between 20-22 teams every year.

This year, there are 22 teams. Each team is generally comprised of eight cyclists. The winner of stage one for the 2019 Tour was Mike Teunissen from the Netherlands.

The first day of the Tour, the cycling teams rode 120 miles in a large loop, and then returned to the Belgian capital. Then, the route will direct cyclists back to the Tour’s origin country: France.

The first stage of the Tour is called “Le Grande Départ.” The 106th Tour de France includes 21 different stages. Combined, the stages are a total length of a whopping 2,149.9 miles. (A visual layout of the route on a map of France can be seen here on the Tour’s website.)

The route changes slightly every year, but one aspect of it has remained the same since 1975. The Tour’s finish has long been held on Paris’ Champs-Élysées.

Where to Watch the Tour de France in Paris

So, if you’re in Paris for the final weekend of Le Tour, you have a couple of options.

Of course, you can make your way to the finish on the Champs-Élysées. The nearest metro stations are:

If you want to go to the photo-finish spot, the Champs, make sure you get there early! The area will get crowded, so lay claim to your place early on and do some vocal warm-ups for maximum cheer-preparedness.

If you’d like something a little less crowded, scope out a spot near the Jardin des Tuileries. Head to Rue de Rivoli to nab a space there, where there will be slightly fewer people.

(NOTE: Some metro stations may be closed, so be sure to check metro information day-of. Alternatively, being a cyclist yourself that day will be far easier than braving the crowds on public transit. Rent a bike and hit the streets – you’ll have easier access and greater mobility.)

If you attended (or watched on TV) the World Cup for a France game, you definitely heard this chant one time or two:

And then there’s the classic French cheer:

And if you find yourself cheering near a French person and want to offer commentary and converse, here is a list of some essential French Tour de France vocabulary.

If you’re like me, you may feel awe-inspired watching the athletes compete at the Tour de France, and it may inspire the urge to hop on a bike yourself. Fat Tire Tours offers a wide range of bike tours, as well as walking tours and Segway Tours.

You, too, could be soaring through the streets of Paris in no time. On your own personal Tour de Paris.

Did you know that we offer a once-a-year bike tour on the morning of the Tour de France’s final day? We ride through the nearly empty streets of Paris early in the morning, just hours before the race finishes in the heart of the city. This is our only tour all year that cruises down the Champs Elysées and makes a stop at the Trocadéro thanks to the road closures! We end the tour with coffee and croissants in front of the Eiffel Tower. Don’t miss out on this once-in-a-lifetime tour if you’re in town on Sunday, July 28th 2019!