Willkommen in Deutschland! Or, as we English-speakers say, “Welcome to Germany.” Now that you’re finally here, I think it’s high time for a drink, don’t you?

Ordering a drink in another country can be a bit overwhelming, especially if you don’t speak the language. But don’t worry, because with these three tips, you’ll be ordering like a local on your Fat Tire Tour in Berlin or Munich in no time – with a beer in your hand to prove it.

At most German restaurants and beer halls, you don’t wait to be seated. Germans are all about efficiency, after all. No need for pointless waiting around! Unless there’s a host stand blocking your path, head right over to a table and make yourself at home. It’s time for a beer. 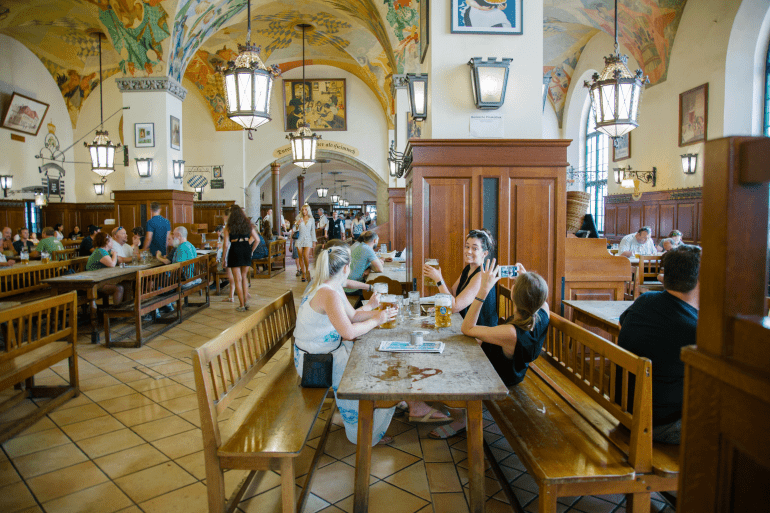 Most Germans think Americans are a bit off their rockers when they include flavors like pumpkin, chocolate or coffee in their beer. This likely stems from the German Reinheitsgebot – the German Beer Purity Law followed by many breweries. It states that water, barley, hops and yeast are the only ingredients that can be used in German brewed beer.

While not every brewery follows the law today, many Germans and Austrians are used to their beer tasting a certain way. In fact, the first time my husband left his Austrian hometown (just south of Germany) for Ireland and tried a coffee-flavored Guinness, he couldn’t believe the audacity of the brewery – that dark stuff certainly wasn’t beer! (In recent years, however, he has since gotten used to the taste and has become Guinness’ biggest fan – once almost buying out the entire Guinness Factory gift shop in Dublin due to his love for the product. Anyone need a pair of Guinness socks? Umbrella? Sweater?)

While German restaurants and beer gardens may not offer as many unique flavors of beer as Americans are used to, the beer they have is absolutely delicious. Although beer availability varies significantly by region, a few common German beers you should recognize are:

• Weißbier (vaiss bee-uh) / Weizenbier (vait-sen bee-uh):
With delicious notes of banana and clove, this refreshing wheat beer hails
from the southern German state of Bavaria. Served in a tall glass, the golden-colored Weißbier (including the famous Hefeweizen) is a favorite among the Bavarians of Munich. Be sure to order a Weißbier during your Fat Tire Tour of Munich – they’ll think you’re one of the locals!

• Dunkelweizen (doonk – el vait-sen) / Dunkles Weißbier (doonk-les vaiss bee-uh):
In the mood for something darker? Then a Dunkelweizen is the beer for you. A darker version of the normal Hefeweizen, this beer is creamy and full-bodied, with a slight banana-bread-like taste in some varieties. Yum!

• Pils (pilz):
If you’re craving something light and crisp, then a Pils, or pilsner, is the way to go. While this beer originated in the Czech Republic, a German Pils is pale in color with a slight bitter taste – definitely a refreshing drink during a long bike ride.

• Helles Lager (hell-es lag-uh):
No need to worry – this isn’t the lager from hell. “Hell” simply means “light” in German, and this beer is just that: a light pale lager with a delicious malty taste.

• Märzen (mer-tsen):
Ever been to Oktoberfest? If so, this is probably the beer you drank there (whether you remember it or not…). While the colors of a Märzen can vary, this beer usually has a copper color and a smooth, malty taste – perfect for drinking at those day-long festivals.

• Berliner Weiße (bear-leen-uh vaiss-uh):
If you’re on the Fat Tire Tours Berlin Bike Tour, what better way to celebrate than a beer popular in Berlin itself? This pale beer, one of the very few “sours” you’ll find in Germany, is tart and tangy in flavor, and sure to be refreshing during a ride around Germany’s capital city.

Whatever beer you choose, it’s bound to be delicious. The Germans know their beers. And now, time to order. 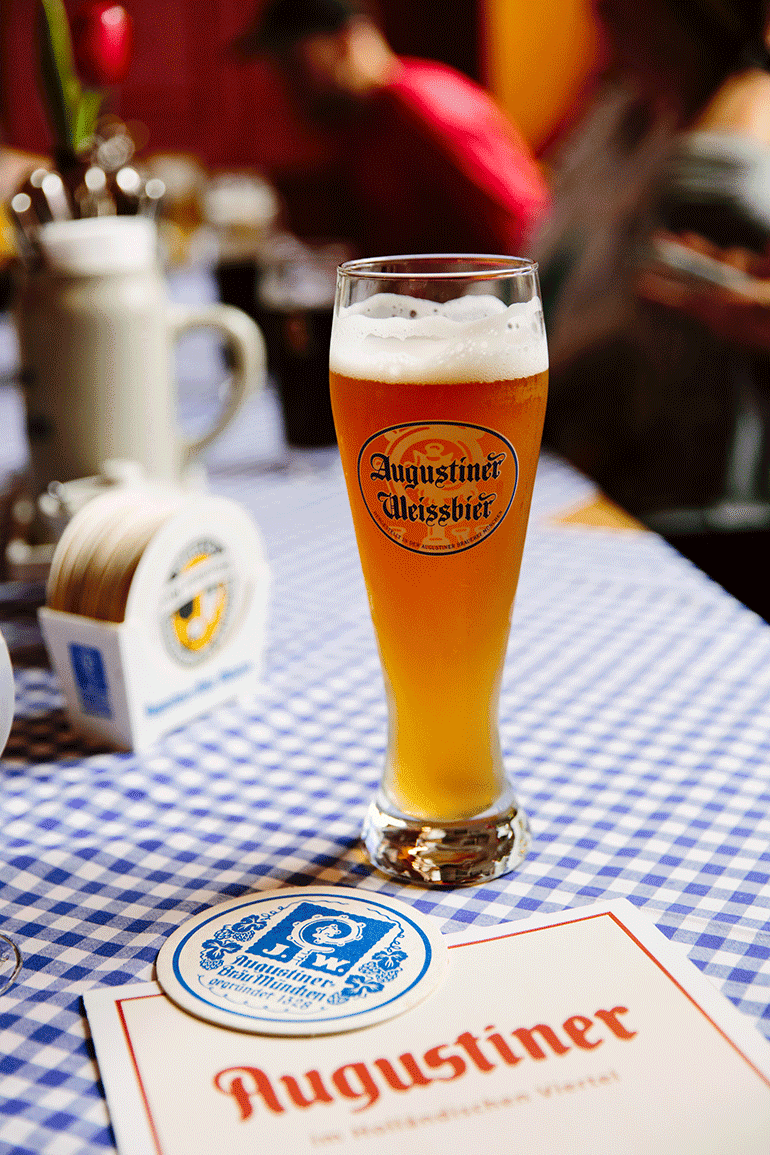 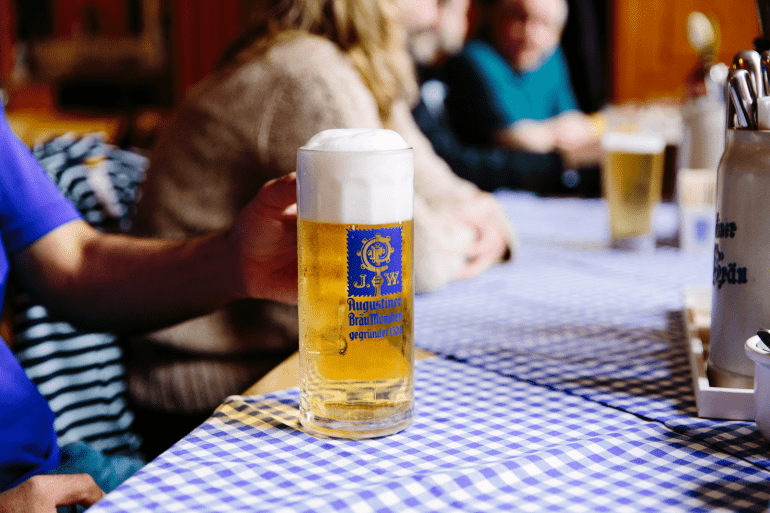 Once you’ve made your decision, the server will come to your table. You may hear Was möchten Sie trinken? (“What would you like to drink?”), Was darf’s sein? (“What will it be?”), or the more simple Bitte sehr (literally “please very”, but it actually means “Please tell me what you would like” here). Side note: Knowing the word “bitte” is a great way to beef up your German language skills. With knowledge of this one simple word, you can now say six complete phrases in German:

Now that you’re practically fluent, you’re ready to place your order in German. There are a few basic German phrases you can use:

This is the standard phrase for ordering something in German. Simply say: Ich hätte gern ein Weißbier, bitte. (Don’t forget to throw in your new favorite word “bitte” at the end of the phrase – here it means “please”.)

This phrase is a bit more casual, but it is perfectly acceptable in ordering situations. I’m sure you’ll order more than one beer (who stops at just one?) so perhaps try phrase one with your first beer and phrase two with your second. The server will likely be impressed with your wide vocabulary. And don’t forget your “bitte” at the end! Ich nehme ein Dunkelweizen, bitte.

3. Ein …, bitte (ayn … bit-tuh): “A …, please”
If you’ve had a couple beers and all the German you ever knew is seeping out of your brain, stick to these two easy words. Ein Helles, bitte. (Time for the light stuff if you’re forgetting your German!)

4. Zwei mal, bitte (tsvai mal, bit-tuh): “Two, please”
If your friend happened to order the exact beer that you wanted right before it’s your turn to go, then you’re in luck – you get the easiest phrase! Scenario:
Server: Was möchten Sie trinken? (“What would you like to drink?”)
Friend: Ich hätte gern ein Märzen, bitte (“I would like a Märzen, please.”)
You: Zwei mal, bitte (“two, please”)
With this simple phrase, your server will know you also want a Märzen. Piece of cake!

Now that you’re up on the beer lingo, it’s time for you to go out into the beer gardens of Germany. Cheers to you and your bike-riding friends! Or as the Germans say, Prost!

* Pronunciation of the word “ich” is a bit difficult to describe, as it ends with the German “ch” sound. To make this “ch”, which we don’t have in English, say the word “yes”, putting the stress the “y” sound. Keep your tongue in this position, at the back of your bottom teeth and the middle part touching the roof of your mouth, and then say “eek”. This should produce the softer “ch” sound the Germans make. If you’re not too worried about sounding perfect, “eek” will also be understood.